The San Diego Business Journal published an article announcing the nationwide launch of the Connequity platform. Our CEO Scott Weinbrandt and Founder Russ Hall are quoted in the article, which ran online on December 19 – Connequity’s Platform Introduces Matchmaking for Networking, and in the print edition on December 22.

See the full story below! 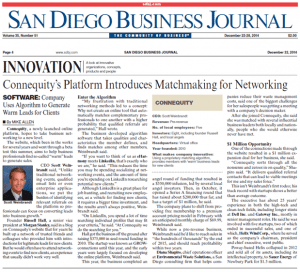 The website, which been in the works for several years and went through a beta test this summer, aims to help business professionals find so-called ?warm? leads to generate sales.

CEO Scott Weinbrandt said, ?Unlike traditional networking events, qualified email lists or even enterprise applications, we put the burden of identifying relevant referrals on the platform so professionals can focus on converting leads into business growth.?

Founder Russell Hall, a senior vice president at Morgan Stanley, said in a blog on Connequity?s website that for years he built up a network of trusted friends and colleagues who provided him with introductions for legitimate leads for new clients. But he would often have to attend networking events to find new clients, an experience that usually didn?t work very well.

?My frustration with traditional networking methods led to a concept: Why not create an online tool that automatically matches complementary professionals to one another with a higher probability that qualified referrals are generated,? Hall wrote.

The business developed algorithm software that takes qualities and characteristics the member defines, and finds matches among other members, Weinbrandt said.

?If you want to think of us as eHarmony meets LinkedIn, that?s exactly who we are,? he said. ?This reduces the time you may be spending socializing at networking events, and the amount of time you?re spending on LinkedIn researching potential new clients.?

Although LinkedIn is a great place for job hunting, and recruiting new employees, as a vehicle for finding new clients, it requires a bigger time investment, and the results aren?t always positive, Weinbrandt said.

?On LinkedIn, you spend a lot of time searching individual profiles that may fit your criteria,? he said. ?At Connequity we do the searching for you.?

Hall got the business off the ground after raising $375,000 in seed round funding in 2010. The startup was known as GROWconnections until this year, and the early years were largely focused on developing the online platform, Weinbrandt said.

This year, the business completed an angel round of funding that resulted in a $550,000 infusion, led by several local angel investors. Then, in October, it opened a Series A financing round that has raised about $200,000 thus far, and has a target of $1 million, he said.

The company plans to shift from providing free membership to a premium account pricing model in February with an anticipated monthly charge of $69.99, Weinbrandt said.

While now a pre-revenue business, Weinbrandt said he?d like to reach sales in ?the hundreds of thousands? by the end of 2015, and should reach profitability within two years.

Diana Shapiro, chief operations officer at Environmental Waste Solutions, a San Diego consulting firm that helps companies reduce their waste management costs, said one of the biggest challenges for her salespeople was getting a meeting with a company?s decision maker.

After she joined Connequity, she said she was matched with several influential business leaders both locally and nationally, people who she would otherwise never have met.

One of the connections made through the website resulted in a $1 million expansion deal for her business, she said.

?Connequity sorts through all the nonsense and zeroes in on quality,? Shapiro said. ?It delivers qualified referral contacts that can lead to viable meetings for me and my sales force.?

This isn?t Weinbrandt?s first rodeo; his track record with startups shows a better than average outcome.

The executive has about 25 years? experience in both the high-tech and clean-tech fields, including longer stints at Dell Inc. and Gateway Inc., mostly in senior management roles. He said he was involved with five startups, two of which ended in successful sales, and one of which, Helix Wind Corp., where he served as the company?s chairman, president and chief executive, went public.

Poway-based Helix collapsed in 2012 and sold all of its assets, including its intellectual property, to Sauer Energy of Newbury Park for $1.5 million.